THE ROLE OF THE ESG&EC

April 29.  Our '20/20 Perfect Vision Tour', incorporating two World Series events, will only go ahead if and when the present social restrictions are relaxed.

We have cancelled our course and accommodation bookings for the week of May 18 with a number of Central Coast golf courses reporting they have limited course access to members only.  Costa Plenti landlords have agreed to carry accommodation deposits forward.

Business entrepreneur Wayne Pearce has been appointed by ESG&EC President Love with a brief to have the tournament start as soon as possible.  A former Leichhardt Oval hot dog vendor, Pearce is overseeing the club's 'Project Uranus' and seeking out the advice of as many as five different club experts to determine appropriate safety protocols, as well as the most appropriate accommodation to house the players when the tour gets underway.

Pearce said the initial advice of infectious and sexually transmitted diseases expert, Professor Shearman, was cause for optimism. "Absolutely.  The meetings I’ve had with him have been mostly very encouraging and then later in the afternoon somewhat bewildering.  The biosecurity aspect is the core aspect up front that we need to address because those parameters determine where and when the event can be played and that feeds into what the tournament structure will look like.

"There's a fair bit of work that needs to be done in terms of protocols but most importantly players are certainly keen to get up there as soon as possible.  They're willing to put their lives on hold and enter a self-imposed Central Coast bubble."

April 29.  With the NRL announcing plans yesterday to have their season resume on May 28 Fatcat's NRL tipping competition, 'A Competition With Differnce' is now defrosting after being removed from the freezer.

There's still a few obstacles for the NRL to overcome so we'll see how they unfold out over the coming days.  Expect more news in a fortnight.

Beercoin's listed price is underpinned by the cost of a schooner (425ml) of Resch's served in the public bar of The Entrance Hotel during the World Series of Golf (1 schooner = 1 Beercoin).  In the 12 months to May 2019, Beercoin's market capitalisation rose 4.5% to $1,035.

CATHOLICS vs. CONVICTS
30 Tales for 30 Years 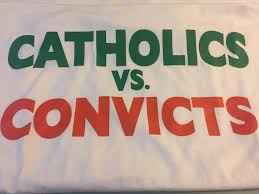 These few words printed in jest on a t-shirt by an savvy and opportunistic member took an already bitter rivalry and lit a blazing fire under it.

In October 1994, Per-Ulrik Fatcatsson (Christian Brothers) battled Seve Hemosteros (Canterbury High) to the death in arguably one of the greatest games in Match Play history.  It was sheer determination vs. swagger, Irish Catholic vs. Protestant, humble public servant vs. corporate heavyweight.

The outcome shocked the sporting world and it's taken nearly 25 years for the players to sit down and tell their stories.

Few of the thousands of players who make up today's multi-million dollar Earlwood Euchre industry know anything about the game's origins, nor do they pay any respect and, more importantly, dividends to it's founders.

That's about to change.

The ESG&EC, a joint custodian of the game, has engaged one of the country's greatest strategic and legal minds, Tack Nicklaus QC, to protect it's commercial interests.

He had money, butchery smarts, a reverse golf grip and became the first player to achieve the club's coveted home and away double after winning the 1990 Match Play Championship and the 2002 World Series.

So why has Tubby Waldorf been disliked so intensely, by so many, for so long?  Maybe it's the much maligned Saturday morning horse tips or a wardrobe of striped shirts.

He was The Beatles of golf - a charismatic, handsome and slender figure from Engadine who worked wonders with the ball and thrilled galleries wherever he went.

But Dick Faldo was also the lead in a Shakespearean tragedy fuelled by alcohol and the fading memories of old sexual conquests.

We'll talk with the neigbours who nailed a bottle opener to their wooden fence to facilitate his afternoon drinking sessions and meet the only woman from the 'Lender of Last Resort' who spurned his advances - his sister - and ask her the big question:  Does she now regret that rash decision?

The streak began when he defeated hot shot 6th seed Kenny Crenshaw 3 & 1 in the Round of 16.  A week later, Heckle Sunday, he beat the favoured Tubby Waldorf 2 & 1.  The following Friday he saw off the well-fancied Hunter Meehan 5 & 3.  In the final match he defied the odds to beat Peard Fulke 3 & 1.

Was it skill, good fortune or an old-fashioned and carefuly orchestrated betting coup that turned the perennial underdog, Bourkie Baird, into the 2013 Match Play Champion?

On December 10, 2013, Sotheby's London office auctioned off what could be considered the most important historical document in sports history - Seve Hemosteros' original World Series of Golf blueprint, drawn up at Robo Mediate's Macleay Place residence over a few drinks on Boxing Day, 1988.

This is the story of one man's fanatical quest to win back this seminal artifact at auction and bring the document home to Earlwood where Hemosteros was born and raised.

25 years after he personally witnessed the blueprint's creation, Mediate inspired a group of wealthy benefactors to dream his dream and take a few shares in a couple of greyhounds as well.

THE PRINCE OF PROFANITY
30 Tales for 30 Years

The young viscount rescued from a post-apocalyptic Warsaw became infamous in his adopted country when, at the age of 5, the first English words he uttered both contained four-letters, one beginning with F and the other beginning with C.

Sitting for the Higher School Certificate in 1973, he could not have been any prouder when he was awarded 2 F's and 4 C's by the Board of Studies.

And nearly half a century later, it's hard to discern even the slightest expansion to the now Flemington Fruit Markets f*#klift driver's simple vocabulary.  WTF*#k !!

SMALL POTATOES: WHO KILLED THE PRESIDENTS CUP
30 Tales for 30 Years

A bold challenge, a fearless experiment and ultimately, a spectacular failure.

In 1999 a new event challenged the establishment's cosy duopoly, the World Series and Match Play Championship, but after a promising start at North Ryde and a final round at Eastlakes less than a decade later, The Presidents Cup disappeared from the ESG&EC sporting calendar.

We remember the blonde mullet, a cigarette glued to the lips and those enormous fairway splitting drives that propelled him to victory at the 1995 World Series.

We knew Big Jack Daly as much for those larrikin traits and his large dusters as for the constant drinking, womanising and swearing, mostly done off the course, that forced him into rehabilitation and a premature sporting retirement.

He's someone who played two sports professionally - golf and soccer.  When speaking to others about him, I noticed something I'd never experienced before.  At the mere mention of his name, people either immediately lit up in excitement or fell over laughing.

Boo Boo's story isn't really a sports story, it's a superhero story.  A superhero who broke his thumb shaking hands before an over 45's game in the Sutherland Shire minor leagues and, as a result, signed on as a marquee player with Sydney FC and became the face of Nike's landmark ad campaign, "You Don't Know Boo Boo".

The following excerpts are taken from Rules of Earlwood Euchre (1973) as amended published by Earlwood Printing, a division of the ESG&EC.  This text has now surpassed Hoyle's Rules of Games to become the primary and definitive reference source for players of Earlwood Euchre.