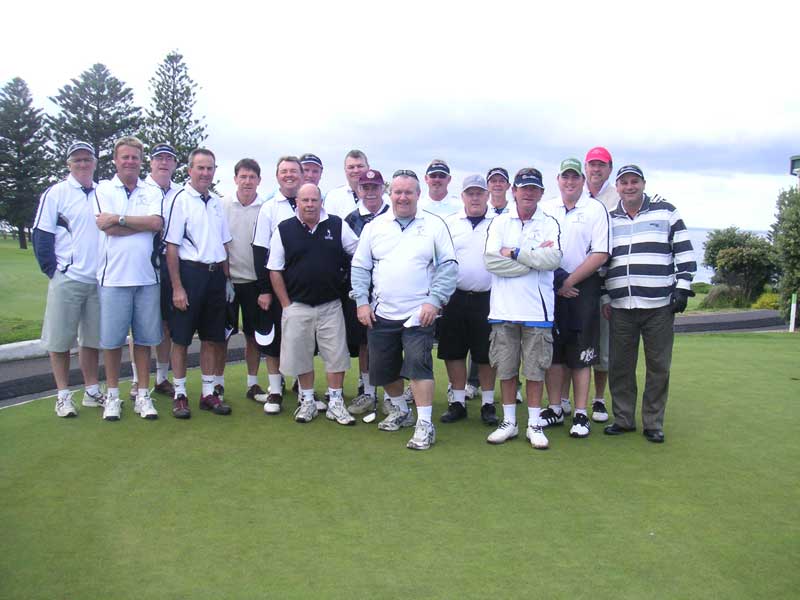 First held in 1989, the World Series of Golf is the ESG&EC's premier tournament.  It is played Monday to Friday early to mid May over 4 rounds on the NSW Central Coast.

The week away is a demanding test of stamina and guile, both on and off the course.  Four days of play, a minimum five afternoons and nights of socialising, gambling and drinking, and on the golf rest day we either watch the Sydney races from the comfort of The Entrance Hotel or head to the local gallops at Gosford or Wyong.

To assist players with their preparation, the club offers voluntary but popular pre-tournament 1, 2 or 3 day sea-level acclimatisation and hydration programs run by the self-accredited industry leaders in hydration theory, The Anslow Institute.

Points are awarded according to your finishing position each day - 1 point for first, 2 points for second etc.  At the end of the week, the player with the lowest tally of points is the 1. winner.  If there is a tie, the player with the best placing in the last round wins on a countback.

1. A minimum of 3 rounds must be played before a winner can be declared and players must have played at least three rounds to be a contender.

Starting with the 2017 tournament, the club's Tournament Competition Committee (TCC) has made changes to the competitions played on the teams days with the new formats listed in the table below.

These considered changes have been introduced to emphasise team scoring (aggregates instead of best ball), provide greater diversity in the events played and, where possible, condense the spread of placings.

THE RULES OF GOLF

All ESG&EC events are subject to the rules of golf.  If something unusual occurs during your round, the best advice the TCC can give is to consult with your playing partners, both as a matter of courtesy and to check on the legality of your proposed course of action, before moving, dropping or playing your ball.

The low marker in each group will be the nominated rules official for his playing partners.  If the low marker himself is to be the subject of a contentious decision, the group may check with his counterpart in another group for a ruling.

The ESG&EC uses the world renowned Dickworth-Lewis Handicapping System for all tournaments.

The system imposes the following constraints on the World Series: